All of my activities from Strava if they started from the same place at the same time.

Includes a couple of 100km cycles. But mainly walks on the beach, 5 km runs, and 10km cycles.

You can see the patterns from a number of locations that I have lived in.

This is a look at how the map of the Dublin tram network, the Luas (Irish for speed), compares to the actual geographic footprint.

For a simpler view:

The processing of the transition is done in PostgreSQL with PostGIS, with the final animation in QGIS.

This is a topic I have covered in the past as well: Scotland’s Changing Outline

When the sixth volume of Joannis Blaeu’s Atlas Novus was released in 1655, the maps of Scotland formed one eighth of the total maps in his world atlas. Making Scotland one of the best mapped countries of the seventeenth-century world.

The animations include the following maps from the National Library of Scotland:

Cycling Through the Maps by Publication Date

Comparison to Modern Day In Between

Read about the maps here: Historic Maps of Scotland from Blaeu to Dorret (1600-1700)

There is also a t-shirt with all of the outlines overlaid, if you are a fan of Scottish cartographic history.

Inspired by the “made with QGIS” logos by Klas Karlsson.

I made a few for OpenStreeMap ones. Well, I added some text to existing logos:

The simple OSM logo by ScubbX.

Both logos are trademarked by the OSMF, but these are unofficial. For the full attribution and copyright guidelines visit the OpenStreetMap website.

2018 was a very productive year for OpenStreetMap in Ireland.

Finally a company was formed to facilitate becoming a fully fledged local chapter.

The average locations were created using a window function in PostgreSQL. We can utilise the geography type to take into account the curvature of the earth and make the calculation on a spheroid.

So for the average location of the last five years:

Some of the outputs from my Data Driven Cartography workshop at the 2nd OSGeo Ireland conference. 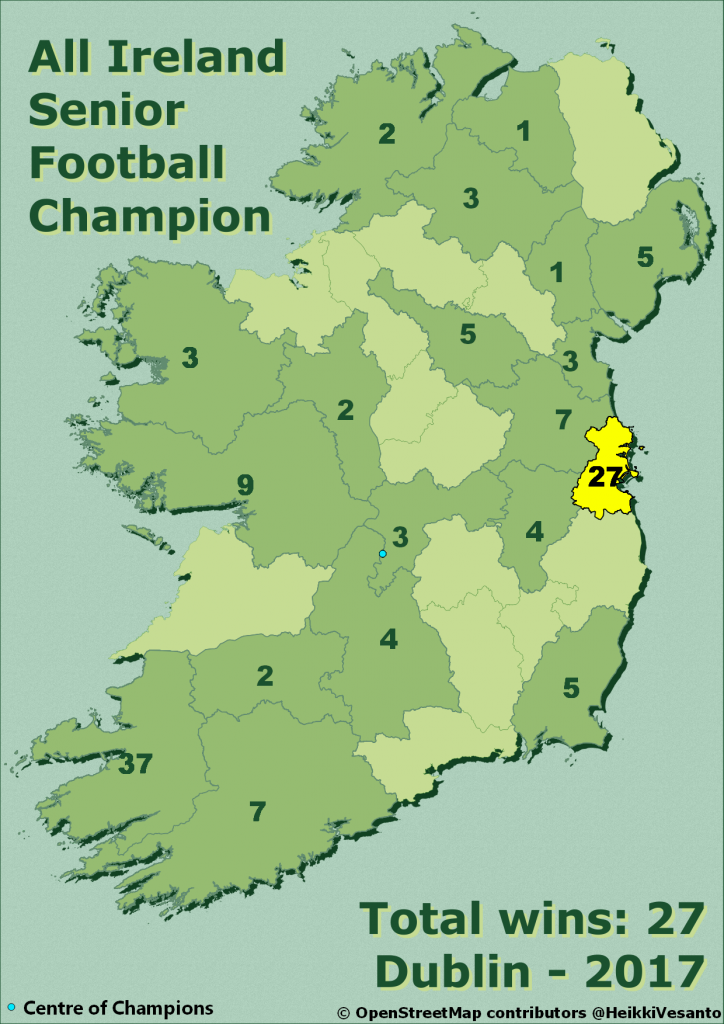 Last week I was invited to give a workshop at the Second Irish OSGeo Conference in Portlaoise. The event was a great success with a attendees from across the OSGeo space, from academics to startups.

I also volunteered to give a talk on OpenStreetMap (OSM) in Ireland. Since we are currently in the process of setting up an official chapter of OSM in Ireland. Check out OpenStreetmaMap.ie if you want to help.

Check out my full talk: here

But some of the visuals are more interesting than the talk as a whole.

To start out, the first edits in Ireland. 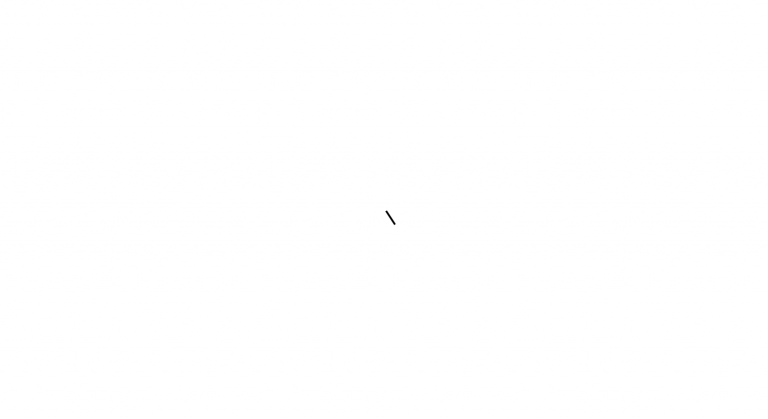 Located in Banbridge, in Northern Ireland between Newry and Belfast: 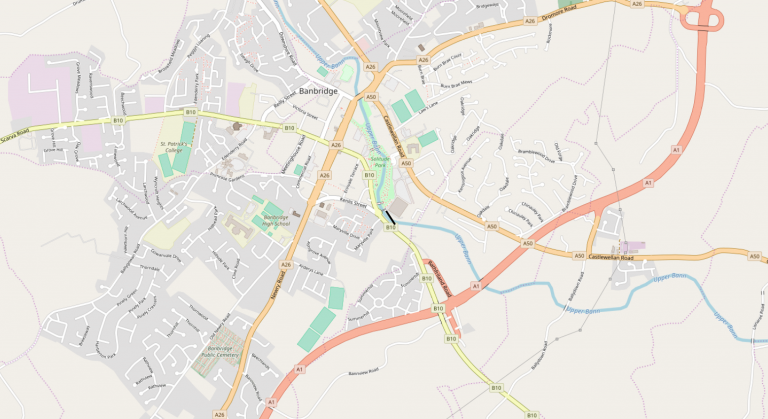 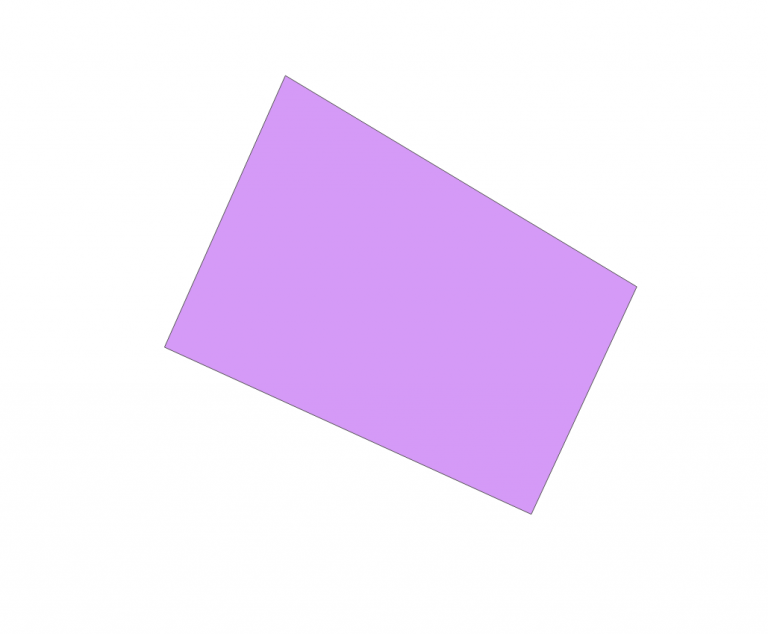 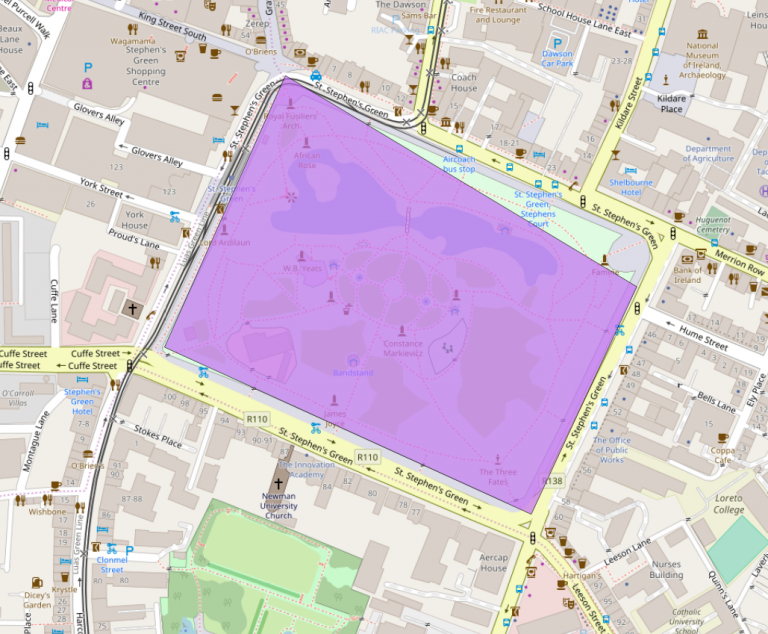 Then a look at the full history of roads in Ireland on OpenStreetMap:

A large part of the history of OpenStreetMap in Ireland is the townlands project. Townlands in Ireland are small divisions of land, often used in addressing for example. Your address could be: Mr. O’Brien, Blue house, Tawny (the townland), Donegal. The postman knows where you are.

There are over 61,000 townlands in Ireland. Traced manually from 650+ out of copyright OSi maps from Trinity College. Check out Townlands.ie for more info.

The project ran from 2012 to 2017 and the progress is clear when charting the history of boundaries in OpenStreetMap in Ireland:

And since the conference was held in Portlaoise, here is how it looks over time in OSM:

For the script to generate these histories see: Creating OpenStreetMap History Visualisations

It has been a rich history. It is a young country, with myself being alive for almost a third of it.

In honour of #Finland100. Here is 90 years of Finnish hockey champions:

With ice hockey still being a very new sport in 1927 the victory went to Viipurin Reipas, primarily a football and bandy club. Located in Viipuri, a city which was lost to Russia after the Winter War.

At this stage ice hockey was purely an amateur sport, with sports clubs taking part in ice hockey as part of a larger program. Most often football in the summer and ice hockey in the winter, but also combined with other sports.

After Viipuri the championship went to Helsinki, with their football club. While no longer active in ice hockey they are still active in the highest level of Finnish football.

The Helsinki – Tampere fight for hockey championship was established early, with 1930-1930 seeing a standing of:
Helsinki 1
Tampere 1
Viipuri 1

1939 to 1945 were crucial years for Finnish history. The war with Russia was one for the survival of Finland as a whole.
Some sacrifices had to be made.

The 1939-1940 season was completely called of for the Winter War. During which the captain of Tampere Ilves (3 time champions at the time, and 16 time champions all time) Jussi Tiitola was killed, among others.

1942–1943 was played as an 8 team series. With KIF winning their third championship in a row, discluding pauses for war.

The 1943–1944 season was started but a mass bombing of the Helsinki Kaisaniemi stadium called the season short. It was agreed that if Tampere Ilves (who had 0 losses at the time) could beat Tarmo and KIF they would be awarded the championship. They beat Tarmo, but unfortunately the transport connections between Tampere and Helsinki were bombed the day before the Ilves – KIF match. Thus the championship was never awarded.

The after war period saw a domination from the Tampere. With 18 championships in 24 years. With Ilves winning 11 and TBJ/Tappara winning 6 and KOO-VEE 1.

But notably champions from other cities aside from Helsinki and Tampere emerged.

Like TPS from Turku first champions in 1956, but future 11 time champions.

Tarmo (no longer active) from Hämeenlinna winning two in a row.

While the SM-Series was mainly amateur it changed into the SM-Liiga in 1975, bringing with it a move to a professional sport.

This also introduced the playoffs to determine the overall champions. Also a relegation system was introduced, with teams coming last in the SM-Liiga facing relegation to a lower division and giving lower teams and opportunity for promotion.

The first championship outside of Southern Finland went to Oulu in 1981.

1985 was the latest championship for Ilves, their 16th in total.

With JYP from Jyväskylä winning in 2008 the total of cities with victories comes to 9.

The Ilves crown of 16 championships was met by Tappara (formerly TBK) in 2016, and beat in 2017 with back-to-back victories.

Here’s to another 100 years and more of hockey in Finland.

Storm Harvey produced some extremely high levels of rainfall. Some areas of Texas received over 50 inches of rain over 9 days.

The National Oceanic and Atmospheric Administration (NOAA) provided some really great real time datasets to map the progress of the storm.

Among these were:
Hourly Precipitation
and
Hurricane Path

From these we can produce a GIF of hourly precipitation: 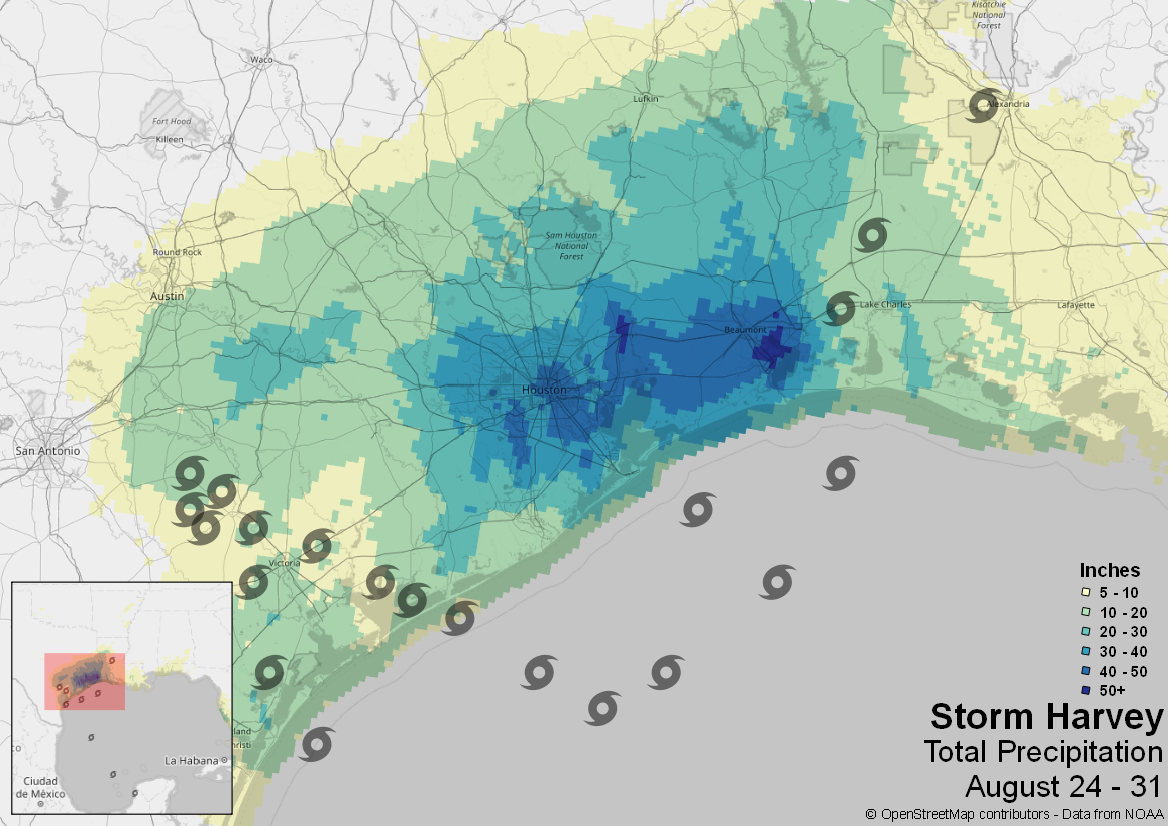 Particularly the hurricane path was possible to create in QGIS using the Atlas Generator, and the excellent new:ish geometry generator. This can be found as an option for any layers symbology, as one of the renderers.

For my map I had a non spatial table that drove my atlas. This was a log table of all of the hours of precipitation I had loaded into my database. So I looped through each entry and showed the corresponding points of hourly precipitation for the corresponding hour. I also had hurricane path data as points for every 6 hours. So I could use the geometry generator to interpolate points in between known points.

While the query ended up being pretty long it is pretty straightforward.

It only needs to be run when the hour being generated does not end with a 00, 06, 12, or 18, because those are the positions I already know.

For the rest I need to generate two points. One for the previously known point, and one for the next known point.

Then I would create a line between those two points, measure the line, and place a point on the line x times one sixth of the way for the start of the line depending on the hour from the last known point.

Overall I am very impressed and happy with the result. With a bit of data defined rotation the storm progress looks great.